The concept of ride or die is how I have been conditioned since birth…my parents are still together after 51 years; 42 years of marriage after 9 years courting since they were 12 & 13 yrs. old.

I was born into an existence of politics, passion and intensity. Ride or die is in my DNA.

I have no grey scale.

I love with all of me, sometimes until it consumes me… I am loyal to a fault.

As it often goes, my relationships with men have been shaped by my first few dynamics that I experienced as a young child.

Anyone who has shared love with me knows I burst at my seams to be an integral part of a unit; to protect and be protected.

Anyone who has shared love with me knows I burst at my seams to be an integral part of a unit; to protect and be protected.

That ride or die mentality stemmed out to all my relationships as a daughter, sister, crew member, and mostly as a mother. I lived and breathed hip hop before I fully understood what it meant. Growing up in a family fueled by socialist convictions, political refuge, and in me and my big brothers case – the most eclectic era of hip hop. I was inevitably going to be a G. Down to ride for mine. Quite literally blood, sweat, and mother-fukin tears.

From the 4-5 different b-boy crews that were all male except me, to the hip hop collectives that I looked up to who were crews of my brother, to my mentors…my loyalty & viciousness to defend them never faltered. I realize that sometimes my love was perceived as tough…maybe even erratic…But my intention was always to nurture & support. And although it is not the same dynamic today… if any single one of them reached out to me – no matter how we fell out/broke up/grew apart, I’d do my utmost to be there for them. Crews break down. Relationships end. Partnerships cease. Although trust is fractured, the lessons are learned. When the raw emotional play has run its course, the theory never fades for me. For better or worse I ride for those I love.

On the flipside of my non-existent grayscale;

I can do bad all by myself because a Queen knows when to get off a ride that’s reached its end.

None of these dismounts were easy.

None of them came without a price.

All of IT was against my base instincts.

I’ve learned to accept the end of certain dynamics, not as my failures, but as valuable lessons, and beautiful struggles. I have begun to listen closely; to sit in silence and realize MY truths. I hold no animosity. I cannot. It denies my child of a mother who is an example of resilience, forgiveness, and perseverance.

I accept my faults completely and wholeheartedly. I am intense. I have been scared, raw, and violent. I have spent a lot of my life not knowing how to process my level of emotional capacity.

Wifey.Trophy wifey. Muse. In the meanwhile.

I have been all of the above.

Side chick…at a time when the term side chick didn’t exist…but unbeknown to me I was one of 2 females in one young man’s life.

I was the girl he took around his crew, to dance session, and to jams.

She was the girl that fit in his bougie side of life, at his bougie school, around his well off family.

He is what I consider my first love. That soul wrenching, sob on the bathroom floor, drowning kind of love.

This relationship was not only the beginning of a love that would define me, but was also the pivotal time where my dance love went to being a definitive soldier for hip hop culture. I started bgirling (breakdancing) and never looked back. When we met we were both attached to other people. I was with what I’d probably consider one of my first real boyfriends who was almost 4 yrs older than me – which is a big ass deal considering I was only 14 and the year was 1995. My older man was one of my first really shitty choices in what would evolve into a long chain of dysfunctional exes. I mistook his need to control me as love and care. I was looking for someone, specifically a male who gave a shit about me. Not to say my brother And father didnt…but as it goes everything is a matter of perception… and their brand of tough love, emotionally unavailable love didn’t give me a real template for good judgment.

And at 14yrs old wtf did I really kno?

Nada.
So, when my bboy came along it straight knocked me off my stan smithed feet. He was everything; He was hella funny, uncharacteristically charming for a 15 year old, smart as all hell. BUT most importantly, he saw me. 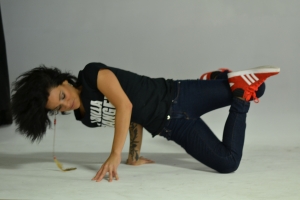 He was the first person who understood me as a dancer…as a creative open wound.

He was the first person who understood me as a dancer…as a creative open wound.

l was angry. It was my general tone. I was emotionally oozing at my edges.

Quick to resort to blows with ANYone, male or female.

But, somehow, with him, that pain dissipated. With him I learned the art form, the history of our dance, the elements that beautifully express our lifestyle. We were a unit, a force, a movement. I RODE for this kat. My bboy was different than anyone I’d ever known. He looked at me different; appreciated me in a way I had never experienced. He saw things in me I never saw; beauty in my strength, fire in my step.

He was my fix. That feeling an addict chases…something I have been tryin to recreate ever since…

The side chick: Me…or her?