There she was, in the kitchen, cake knife in hand and his hair in the other.  She had almost caught him, but he was still loose.  Running through her place and bolting from hiding spot to crevice like a rat caught in the light.

He was a rat though.  Steve ratted her out like she was front-page news and he was the paperboy.  He told them everything.  He showed them pictures, called her all type of names and stuff.  She was his oldest and most recent, his last exploit, and she had been lured by him for the last time.  She knew she was a dummy.  She felt sick that she could have let his slithery tongue lap her into him.  But she did, and so it goes.  She had had enough, and her anger got the better of her.

Years ago he had started by making a few irregular visits, but those were planned.  Then he would drop in periodically, without notice.  Eventually he called less and less until she only heard from him about once a month, with zero to one visits statistically.  He had a girl?  He had a family?  Was he married/gay/involved/a hustler or any other possibility that purposely took his time away from her?  No.  He just didn’t care.  She wasn’t worth it anymore.  He was bored, she was getting crazy, and he could see her getting too clingy and fat from the KFC he always brought her (not ‘cause she asked, mind you).  He couldn’t shake her, but he couldn’t resist the idea of an open door, even if the door was loose, falling off hinges and wide open (in his mind).  He told her she wasn’t his type, but she forgave him.  She told him she loved him and he answered “but I don’t love you…”

She only hoped she could change his mind.

She wrote him letters and emails and texts and fb/ig/tw notes that he never responded to, but never took down.  It was clear, public, that she loved him, and she thought that his silence was compliance, but it wasn’t.  He had grown to really not like her but the convenience of Layla was just too tempting.  Each time he tried to let go he weighed his options, and since there weren’t many, there she remained.  Not that he wasn’t cute – he was – but he was shy and lazy, and yearned for the Canadian convenience of a girl that operated like Ontario Works:  you know, never enough but better than nothing?

She had recently learned this.  She had overheard at McDonald’s a girl who she knew he was trying to get with (because he talked about these things – he knew she wasn’t going anywhere).  The girl?  Let’s call her April, because she was the spring in his step, and the buds to the trees he smoked.  April knew Layla was his go-to, and saw her sitting alone waiting for her special order filet.  April was with 2 other females who shall remain nameless because they don’t matter.  She started saying, loud and proud and without looking over at Layla,

“He told me himself! All he has to do is bring her a Twoonie Tuesday meal and she’s hot hahaha!”

Layla went all shades of magenta, and the girls collected their shakes and left, blurting out fake, high pitched laughs and secret side eyes.

She felt sick.  She felt so embarrassed, more than ever before.  Being with him was humiliating!  But she wanted to forgive him, because she knew he was a good guy inside and she wasn’t sure if she’d ever get another man, ever.

At least he told me he loves my body…that’s sweet and he wouldn’t say it if he didn’t mean it, right?  But then…he said that…I f***ed for chicken?  How could he be such an asshole?!

After all these years…how could he say that?!  Fine, I’m going to ask him.  Maybe it wasn’t really him they were talking about – I mean, there are other Steve’s around.  But…they said Lay-bed…which meant Lay-LA.  And it probably also means he talked about me to other girls too who probably laughed at me…he’s such a user. What an asshole! What a jerk! I can’t believe I let him do this to me! I’m so stupid! Oh my God, what’s wrong with me?!

He finally paid her a visit, after not calling, texting, whatever, for two weeks. He walked in, like usual, and sat on her futon.

“Are you talking to that girl April about me?” she asked quietly, hoping to not offend him.

Silence for a moment…

“Because I…” and she told him what had happened at McDonald’s two weeks previous.

“Why do you assume they’re talking about YOU?  Just because they say Lay in the name they called out, so it’s you?  C’mon man, please, that could be anyone.”  He shamed her into thinking she was as stupid as she already thought she was, and it worked, for a second.

And then he tried to kiss her.

She turned away, for the first time ever feeling like kissing him would not be a good idea.  She was still mad, although she usually hid her emotions.

“Why don’t you let me kiss you?” he asked softly, pulling her chin over to his.  She turned even further away thinking that he might apologize or probe a little more about the situation that seemed to hurt her so much.  But he didn’t.  He was now the upset one.

“What’s wrong with you?” he asked, a little more agitated now.

“What’s wrong with you?”  Tears started flowing.  “Why don’t you ever just be nice to me?!”

The hairs on the nape of Layla’s neck started to rise and she started to shake.  She knew this was an unfair question but she didn’t know how to answer it.

High pitched and desperate, she said, “But you always talk about all these girls, like April, and you never want to be with me.  Like BE with me.  It’s like you only want sex!”

“So, what, you don’t like honesty?  I’m telling you because I see you as a friend, and I want to talk to you about it.  What’s the big deal?!”

“The big deal is that YOU’RE USING ME!  And I hate it!” and she swatted at him with a heavy hand.

He fell to the floor.  She didn’t think she had hit him that hard.

“Wait, I didn’t mean to hit you so hard, I swear!” Layla pled with him.

Getting up off the floor and rolling his eyes, “ok buddy.”  He started walking over towards the door and said something about never coming back and that he was done with girls like her. But she was raging.  Something had been turned on inside of her that she couldn’t turn off.  She couldn’t think of the right answers to his insipid dialogue but she knew he would only try to walk back in later without having to answer to any of her accusations.

“WHY DO YOU TREAT ME LIKE I’M STUPID?!!” she screamed, her hazel eyes turning bright green.

She ran past him to the door, locked it and her eyes darted in and out of the tiny kitchen in her apartment.  She wanted something sharp; anything that looked scary.

As he leaned in to reach for the handle she snatched something from the kitchen and grabbed the only thing she thought she could pierce – his hair.  With a cake knife she tried to saw the piece of hair in her hand but ended up yanking off a whole chunk – not because of the knife though.  She felt her eyes grow bluer, hotter, and rage tingled through her entire body.  She had had enough, and the absolute force of which she was moving became too supernatural and overpowering for his weak, weed-head string-bean body – so he ran.  He ran and she followed, but he lost her somewhere.  So she went back to ground zero.

There she was, in the kitchen, cake knife in hand and his hair in the other.  She had almost caught him, but he was still loose.

She was scary looking, because he had never seen her angry, ever.  He could also be as powerful if he hadn’t felt so much pride and guilt all at once.  Layla was only obeying the anger – after years of the BS, she could now get hers.  Yes, revenge!  To make him beg for mercy and a second chance out loud like she had done silently more times than she could count.

Layla heard Steve in the bedroom, and quietly walked across the parquet floors with her fist clenched so tight that her palm bled.  She looked like the hulk, though her eyes were the only things that changed colour.  They were now a yellow-orange, and the hair that had warned her of this had now protruded to the point of being visible, pointed scales on the back of her neck.

“I promise I’ll be nicer Layla!” Steve said in desperation.  “You’re right, I was a jerk and I should have known better!  C’mon now, don’t (smack!) hit me anymore!  I won’t hurt (oof!) you anymore, I promise!”

He was backing up over the bed and over to the window, where his bleeding bald patch reflected in the glass.

Glass. Glass is a good weapon.  Glass cuts deep.  Not as deep as heartbreak, but that’s fine.  She couldn’t reach his heart anyway.

She bounded for him over the bed, faster than he could slip away, and pushed him up by the chin through the window.  As she did, and as the glass shattered, sprayed, dripped and fell, the power she had kept covered up for fear of offending others lept out.

Layla flung Steve and herself heads first through the window, eleven floors down, to rest in the parking lot below. They would never hurt or be hurt by each other again. 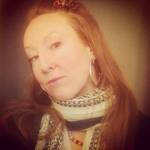 Lindsay Bess a Toronto writer and painter, and lover of all things music-related.  She writes poetry, has started to write short stories and recently embarked on a novel.  She cares about the world and its people, and tries to write from an empathetic view, because we all have a story to tell.
She was recently featured in the Forgiveness Project’s book “F-You: Grief, Loss and Acceptance,” available on http://www.essencebookstore.com. You can also view more of her work at https://electropennpad.wordpress.com

One Response to “[SHORT STORY] Layla and Steve”